Ann Pibal, a Minneapolis-born abstract painter whose work is driven by expressive colors and patterns of lines painted on aluminum, has been awarded the 2013 Rappaport Prize by the deCordova Sculpture Park and Museum in Lincoln.

The museum had a relationship with Pibal even before she received the call recently telling her about the Rappaport honor. Her works were featured in the deCordova’s 2012 Biennial, a show marked by its emphasis on conceptual artists.

“Doing a studio visit with her was a revelation,” said curator Dina Deitsch. “As a colorist, she is so subtle and thoughtful. What it comes down to is that when you really just look and say, ‘What is it?’ It’s really about paint.”

Pibal’s work is notable in that it employs the same elements – lines and color – without sticking to a formula. Lines run parallel, lines twist, they form triangles and swirls and reflections as if in a mirror.

“She’s like a physicist scribbling equation over a white board, puzzling out vital, small-scale unknowns,” wrote the Globe’s Cate McQuaid about Pibal’s show at Steven Zevitas Gallery earlier this year. “But her methodical equations . . . have a graceful simplicity you don’t see on many white boards: straight lines, intersections, and little trolley-like loafs of color that ride along the lines, adding up to a system of weights and balances.” Ann Pibal’s acrylic on aluminum paintings are at once brainy and open-ended, hard-edged and intimate. Without privileging one source over another, her work alludes to the robust history of abstract painting, architecture, and graphic design, as well as landscape and the sublime. She is primarily interested in painting as a way of thinking; in all its facets, her work implies a certain shifting, non-settling, ongoing process.

Her work has been exhibited widely at venues in the United States and Europe including MoMA PS1, New York, Sikkema Jenkins & Co., Feature Inc., Max Protetch Gallery, Meulensteen, Paula Cooper Gallery, ZieherSmith, in New York, Rhona Hoffman and The Suburban in Chicago, Slewe Gallery in Amsterdam, Petra Rinck Galerie in Düsseldorf, and dePury and Luxembourg in Zurich. She has received awards from the Tiffany Foundation, The Joan Mitchell Foundation, The New York Foundation for the Arts, The Pollock Krasner Foundation and most recently a Guggenheim Fellowship Award. 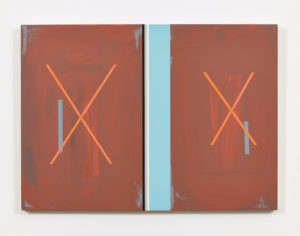 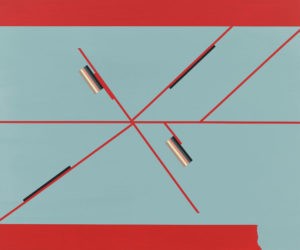 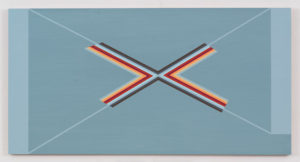