Initially, her work explored women’s identities in a patriarchal society. More recently, the artist has focused on family dysfunction, substance abuse, ethnic cleansing, organized religion, mental health, and healing. Her installations are notable for their use of found objects that mock suburban coordinated decor.

Spileos Scott received both her MFA and BFA from Massachusetts College of Art. Her works have been exhibited at the Institute of Contemporary Art in Boston; the List Visual Arts Center at MIT; the University of Maryland, and the AIR Gallery in New York. Solo exhibitions of her work have also been held at Boston University, the Rose Art Museum at Brandeis University, and the Fuller Museum in Brockton, MA. She holds a Teacher’s Certificate from Suffolk University and has taught drawing, painting, and installation coursework at Massachusetts College of Art in Boston and Lasell College in Newton over the last 10 years.

At DeCordova, Spileos Scott contributed Dieing for a Drink—a life-size dining room bursting with imagery of alcoholic decadence—for Good-bye to Apple Pie: Contemporary Artists View the Family in Crisis (1992) and The Road to Mental Health, an elaborately handpainted miniature village, for Strokes of Genius: Mini Golf by Artists (1995).

In 2000, as a tribute to her Greek heritage, Spileos Scott created Bloodlines: Remembering Smyrna, 1922, commemorating the razing of that city and the decimation of its Greek and Armenian populations. The installation, at the Fuller Museum, put its viewers on the simulated deck of a World War I battleship, surrounded by a sea of scattered heirlooms and detritus.

This fall, Spileos Scott will show in two solo exhibitions in the Boston area: House of Spirits at the Yamawaki Gallery at Lasell College in Newton (September 7 – October 22), and Illuminating Manuscripts at the Dietrich Gallery in Allston (October 6 – 31). Spileos Scott is currently completing eight ceiling panels for installation over patients’ beds in the Oncology Department at Massachusetts General Hospital. This work—more cheerful in nature with its soothing depictions of Cape Cod and autumnal scenes—is dedicated to her father, who died of cancer in 1998. 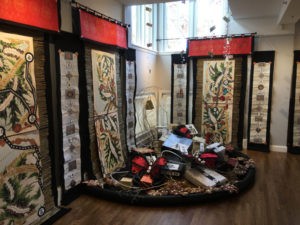