"Receiving the first Rappaport Art Prize was a tremendous boost to my professional standing as a New England artist. Jerome and Phyllis understand this value for both individual artists and our arts community. I have enjoyed watching the award members grow to become a true force for the DeCordova, New England and beyond."

Jennifer Hall is an artist philosopher working in the field of embodied aesthetics. She is among this country’s foremost leaders in the field of art-and-technology – as an artist, educator, curator, and researcher. Since the late 1970s, Hall has used newly emerging technologies to push the aesthetic envelopes of sculpture, video, performance art, sound art, and viewer-interactive/participatory installations. Hall’s work addresses a range of intertwined contemporary issues that include the human body and its relationship to machines, the emotional effect of rational science, language, communication and telecommunication, the roles of women in post-industrial society, art and healing, and shifting questions of identity, responsibility, and surveillance in a world increasingly dominated by human altering devices. Her work has been exhibited at the M.I.T. Museum, the Boston Computer Museum, at the National Conference of the Women’s Caucus for the Arts, the Museum de Bella Artes in Caracas, Venezuela, and on numerous institutionally-supported web sites, including www.bbn.learing.org and, www.mptf.org. In 1999, Hall participated in the DeCordova exhibition Make Your Move: Interactive Computer Art Installations, the flagship project for the first annual Boston CyberArts Festival.

Hall holds a PhD from The Institute of Doctoral Studies in the Visual Arts, a Master of Science in Visual Studies from M.I.T.’s Center for Advanced Visual Studies, and a Bachelor of Fine Arts degree from the Kansas City Art Institute. She has been widely published in web and print periodicals and has lectured internationally on art and technology and its implications in neurophenomenological embodied theory. Hall’s activity as a curator of contemporary art includes the groundbreaking exhibition From the Storm: Artists with Temporal Lobe Epilepsy (T.L.E.). The show opened in Boston in 1992 and traveled to The American Neurology Conference in New Orleans, Louisiana; The Canadian Academy of Neurology Annual Congress, Newfoundland, Canada; and The Meeting of the American Academy of Neurology, Washington, D.C. and The International Neurology Conference and Museum of Contemporary Art Sydney, Australia. Hall received a special award from the National Epilepsy Society in 1994 for her research into connections between T.L.E. and creativity. Hall is Professor Emerita from the Massachusetts College of Art and Design where she continues to work with graduate students in both theory and practice.

“I have come to realize that the self may not be the monolithic entity we believe it to be. I now see that we are always part of the other and no one can come to their own consciousness without an ecological understanding of this wholeness.”
– Jennifer Hall, 2021 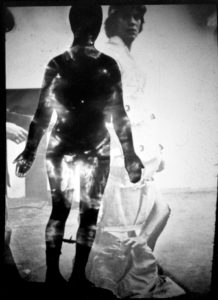