Liz Deschenes (born 1966) is an American contemporary artist who lives and works in New York City.

Her work is situated between sculpture and image and engages with post-conceptual photography and Minimalism. Her work examines the fluidity of the medium of photography and expands on what constitutes the viewing of a photograph. Deschenes has stated that she seeks to “enable the viewer to see the inconstancy of the conditions of display, which are always at play but sometimes hard to see.” Her practice is not bound to a single technology, method, process, or subject, but to the fundamental elements of photography, such as light, paper, chemistry, and time. In 2007, Deschenes presented her series of photographs titled Moiré (2007) at Miguel Abreu Gallery’s “Registration” exhibition. For the work, Deschenes photographed a sheet of perforated paper filtering the light coming through the window and layered the negative with a duplicate in an enlarger to create an abstract image with illusions of movement. Moirés were paired with Red Transfer (1997), a diptych of monochromatic dye transfer prints with subtle differences in hue. The dye transfers’ matrices alignment served as a counterpoint to the misregistration in the Moirés series. In an interview with Mousse Magazine in 2014, Deschenes noted that the Moires series sought to “confound” the limitations of making something “with a property largely outside of the confines of photography and expectations that are brought to looking at a photographic work.”

Two years later, in 2009, Deschenes created Tilt / Swing (2009), an installation of six “silver mirror” panels arranged in a 360-degree floor-to-ceiling configuration. It was based on an unrealized exhibition design conceived by Herbert Bayer, a Bauhaus artist and architect, in The Fundamentals of Exhibition Design. While Bayer’s schema sought to be “an inclusive picture of all [viewpoint] possibilities,” Deschenes’ installation resulted in a fragmentation of the surrounding environment. Commenting on the title of the work, Matthew Witkovsky has written that the words tilt and swing evoke “abstract issues of viewpoint and manipulation, for example the ways in which the spectatorial subject is turned or focused in the controlled setting of a museum building.” At the same time, curator Eva Respini has remarked that in addition to the reference to Bayer, it is crucial to consider the influence of Conceptual and Performance Art in Tilt / Swing, as the work requires a physical “activation by the viewer.”

In her 2012-2013 exhibition at the Secession in Vienna, Deschenes staged a new series of photograms, Stereographs 1-16 (2012). In the installation, Deschenes mimicked the illusion of spatiality in the stereoscopes by converting the gallery into a camera. Deschenes moved the gallery’s entrance to a previously unused exterior side door, leading the viewers through a long hallway (the viewfinder) to two adjacent rooms (the stereograph). Each room contained four Stereographs of the same size. Johanna Burton stated that the Stereographs “must be seen not only as dilating context and insisting on spatial occupation but also as moving speculatively: developing.”[

In 2014, at the invitation of the Walker Art Center in Minneapolis, Deschenes created Gallery 7 (2014), a site-specific installation composed of three elements: eleven photographs in freestanding frames; three horizontal lines etched into the gallery walls; and the natural light from the floor-to-ceiling windows. The freestanding frames were in the center of the space, relocating the viewing experience from the walls towards the windows. The exhibition was on view for a year, throughout which the light conditions changed and encouraged the oxidation of the light-sensitive photograms. The proportions of the photographs, furthermore, were based on those of an index card, in reference to Lucy Lippard’s c. 7,500 exhibition of Conceptual art by women artists at the Walker Art Center in 1973.

In 2018, Deschenes staged her Rates (Frames per Second) exhibition at Miguel Abreu Gallery. In the installation, Deschenes took the proto-cinematic experiments of Étienne-Jules Marey as the point of departure and presented two series, FPS (Frames per Second) and FPF (Frames per Feet). FPS was cut and mounted directly on vertical strips of dibond, and FPF was pressed in thin, horizontal frames. Both series progressed with the rhythm of the viewer’s footsteps, akin to the body’s movement being captured by the camera in time. The Brooklyn Rail described the show as centering on not “the specific atmospheric or environmental conditions that produced each print,” but “how time is felt…and the specific weight that time can hold in space.” 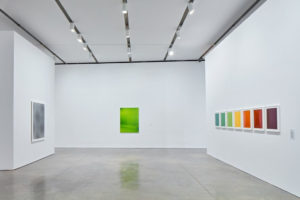