Interview with ‘Ursula von Rydingsvard: Into Her Own’ Director Daniel Traub

Sculpture as personal as it gets

‘Into Her Own’ Review: A Sculptor’s Monumental Achievements

Why Do I Make Art? Mostly, to survive.

Ursula von Rydingsvard was born in Deensen, Germany, in 1942.

She received a BA and an MA from the University of Miami, Coral Gables (1965), an MFA from Columbia University (1975), and an honorary doctorate from the Maryland Institute College of Art, Baltimore (1991). Von Rydingsvard’s massive sculptures reveal the trace of the human hand and resemble wooden bowls, tools, and walls that seem to echo the artist’s family heritage in pre-industrial Poland before World War II.

The artist spent her childhood in Nazi slave-labor and postwar refugee camps, and her earliest recollections—of displacement and subsistence through humble means—infuse her work with emotional potency. Von Rydingsvard builds towering cedar structures, creating an intricate network of individual beams, shaped by sharp and lyrical cuts and glued together to form sensuous, puzzle-like surfaces. While abstract at its core, Von Rydingsvard’s work takes visual cues from the landscape, the human body, and utilitarian objects—such as the artist’s collection of household vessels—and demonstrates an interest in the point where the man-made meets nature.

Von Rydingsvard has received many awards, including a Joan Mitchell Award (1997); an Academy Award from the American Academy of Arts and Letters (1994); fellowships from the John Simon Guggenheim Foundation (1983) and the National Endowment for the Arts (1979, 1986); and exhibition prizes from the International Association of Art Critics (1992, 2000). Major exhibitions include Madison Square Park, New York (2006); Neuberger Museum, Purchase College, State University of New York (2002); and Storm King Art Center (1992). Von Rydingsvard lives and works in New York.

Why Do I Make Art? Mostly, to survive.

To ease my high anxiety, to numb myself with the labor and the focus of building my work.

Objects or the process by which I concretize my ideas feels so good.

Because, I invariably, especially with my monstrous pieces, run into intense anxiety moments from which I have to unravel myself.

Because I endure a hefty load of self-doubt.

Because I have confidence in the possibility of seeing this work through.

Because I see life as being full of abominations.

Because life is full of marvels close to miracles. Because I still don’t get who I am.

Because I will never get who I am.

Because my deepest admiration goes to those who have made art that has interested me.

Because I want attention from those who make good art.

Because I need to use both my body and my mind. The labor of my body is what keeps me awake and alive. . . what numbs me and offers a kind of veneer between me and the things in life which are painful to face.

Because the visuals – that which I perceive through my eyes – are an extraordinarily important part of my life.

Because I don’t want to be doing anything else with my life – that the building of my artwork feels like the most consequential thing I could be doing with my time.

Because I can run into a world of my making, both physically and mentally.

Because I like working with a group of assistants who become another kind of family.

Because I like the daily rhythm of going to my studio. Because it’s a place to put my pain, my sadness.

Because there’s a constant hope inside of me that this process will heal me, my family, and the world.

Because it helps fight my inertia.

Because I like embroidering around my long-ago Polish fantasies.

Because I can reach into the future with my work.

Because I constantly need to try to better understand the immense suffering and pain of my family that I never seem to be able to really understand.

And also because I want to get answers to questions for which I know there are no answers. 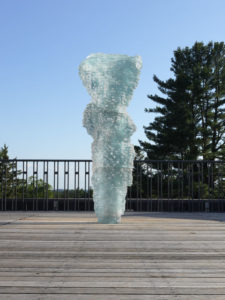 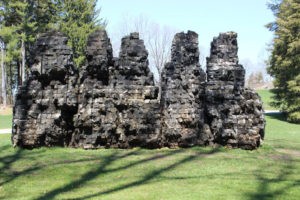